There’s thunder on the tundra and giants across the land. In the midst of a windswept night, the pale glow of the moon dances across his heaving biceps. A raven crows. Men cower in awe and women moisten in anticipation. Anger is his middle name.  He is the rock warrior, THOR.

This article was originally published in Collide Art & Culture Magazine.

Emerging out of Canada in the early 70’s, Jon Mikl (aka THOR) had it all: the looks, the hooks, the feats of strength. Surely his ascent to the very pinnacle of rock n roll superstardom was assured?  With a flip of his blonde locks and a wave of his hammer, he would stride muscularly into the pantheon of the greats.  Or would he?

Mis-management, industry trends, and a complete nervous breakdown all conspired to derail the Thor train before it could power its way into Valhalla – but like any true berserker, Thor would not surrender. Since his return in the late 90’s he has remained incredibly prolific, releasing albums and touring relentlessly even whilst struggling with potentially life threatening health conditions. Thor is Sisyphus re-spun, his eternal burden a duffel bag full of merch being pushed up an endless airport travelator.

In 2015, his tale was finally told in the fashion it deserved with the documentary I AM THOR receiving rave reviews on the festival circuit around the world. In the wake of this new frosted wind, I caught up with Thor to get the lowdown on a lifetime devoted to that most seductive and fickle of harpies, the hideous bitch goddess that is Rock n Roll. 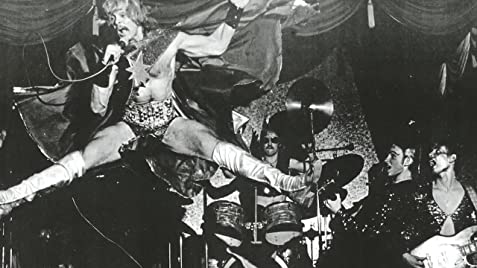 Like all epics of biblical proportion, we need to part the mists of time and start at the beginning. Thor wasn’t always the rock n roll warrior we have come to know and love, throughout the late sixties and early seventies he was a successful body builder, being the youngest ever winner of the Mr. Canada title at the age of 19 and also the first person to simultaneously hold both the Mr. Canada and Mr. USA titles.

“I was inspired by Steve Reeves who played Hercules and George Reeves who was TV’s Superman. Then in the early 70’s, theatrical rock came of age. David Bowie was Ziggy Stardust the thin white alien, Alice Cooper was the skeletal horror rocker. As I had won numerous physique titles like Mr.Universe, I decided to become the muscular rock warrior. Instead of playing with snakes, or breathing fire like Kiss, I would be a superhero onstage that could bend steel, rip license plates in two and smash bricks with my bare hands. All this while singing and rockin out to my brand of music.”

Influenced by the musical stylings of the glitter rock era, the Mikl Body Rock Band released the Body Rock album in 74, followed by Thor and the Imps in 76 – but it was a surprise appearance on the Merv Griffin Show that gave him his big break. Appearing onstage resplendent with cape and hammer in tow, Thor powered through a version of ‘Action’ by The Sweet before unleashing his party piece and inflating a hot water bottle until it succumbed to his mighty breath and exploded , all before a bewildered but enthralled  audience and showband.

“In 1976, I was starring in a show in Las Vegas at the Aladdin Hotel called Red, Hot and Blue. It was getting rave reviews in the press, so Merv came to check out the act and see what all the hoopla was about. He was so impressed, he invited me to appear on a special national broadcast he was having at Caesars Palace the following week. It was my Ed Sullivan moment!

Millions of people tuned in and I received major offers after that for movies, records, modelling and so on. I then made a deal with RCA Records. It really showed me the power of prime time television.”

Thor would capitalise on the hype by releasing what is still his masterpiece, the leather and studs glam rock stomp of Keep the Dogs Away, which went on to be certified gold.  A lost seventies classic, the album is the missing link between Lou Reed’s Transformer and Alice Cooper’s  Billion Dollar Babies, with shades of Iggy, Bowie and The Sweet, all wrapped up in a production that gives a timeless quality to the likes of ‘Sleeping Giant’ and ‘Catch a Tiger’, with footage from this era showcasing a bone-fide star.

“Our costumes were very glitter from 73 – 76. Then Punk started coming in and my stage gear became more leather and studs by 1977 when Keep The Dogs Away was released. I don’t feel that it was a very large gap but as Body Rock and Thor and The Imps were more rock, I felt Keep The Dogs Away had more punk influences. Very Power Pop. We became more metal after that.”

Whether bending solid steel bars with his teeth, having concrete blocks smashed on his chest or belting out anthems such as ‘Knock them Down’, Thor’s shows were a visual and theatrical tour de force.  It’s no surprise then to learn that he found himself gracing the silver screen in B-Movie classics such as Recruits and Zombie Nightmare.

“I always loved science fiction and monster films so I wanted to pursue acting in and producing movies. My friend, the late great John Fasano saw me in the movie Recruits and invited me to star in Zombie Nightmare. It was then we decided to work together on Edge of Hell / Rock N Roll Nightmare.”

Anyone fortunate enough to have seen Rock N Roll Nightmare can attest to its genius. It depicts the tale of the band Tritonz who have convened at a Toronto farmhouse to “record 10 minutes of strong new material”, but are soon beset by the malevolent spirits of the house, as one by one the band members start disappearing in mysterious circumstances. Some may say the movie climaxes during Thor’s shower scene, or when he utters the immortal phrase “Let’s tune our weapons”, but that would be to ignore the unfettered majesty of his epic monologue and encounter with Old Scratch himself, unfurling after a needle drop of a plot twist worthy of Rod Serling’s approval.

“The movie was originally called The Arch Angel. Our plan was to have the character shoot lasers from his eyes and fly around with metallic wings. We didn’t have the budget so I put together the costume I wore with a metal codpiece and cape. When we started filming in late October, the weather in Ontario suddenly dropped from 40 degrees above to 15 degrees below zero. I was literally freezing my ass off when we were filming. It was brutal in the autumn there, never mind during winter.”

Shortly after the film’s release, Thor would retreat from the limelight for close to a decade, citing a nervous breakdown and a belief that the character of THOR was consuming him.  This period, as well as his determination to stage a comeback and obtain the long sought validation of a platinum record is detailed in I AM THOR.

“In 1999 when I was starting my comeback, I met two young film-makers fresh out of film school in Seattle. Al Higbee and Ryan Wise were interested in what I was up to and I invited them to see my concert in Seattle that night. They came by and were so blown away by the show that they immediately wanted to start filming a documentary. We all thought it was going to get done in a couple of years, but it ended up taking 15! The movie has been getting rave reviews and has been amazingly received by the audiences all over the world at the film festivals.”

The film’s arc mines a similar furrow to the story of fellow Canadians ANVIL, as depicted in the ANVIL! The Story of Anvil documentary, with its classic narrative of the underdog who will never say die.

“The only similarity to me is that we are both Canadian and both have unfinished business. Other than that our stories are completely different. For one thing, Lips would never compete for a Mr. Universe bodybuilding championship or appear in a musical in Hawaii as a naked waiter!” 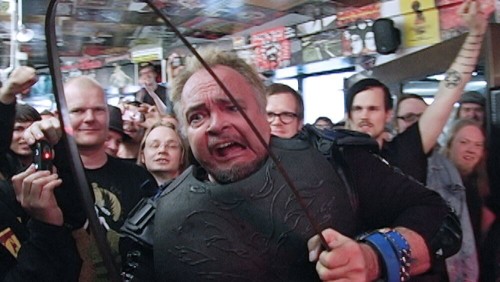 After his late 90’s return from the wilderness years, THOR may have lost his physique and his Sampson-esque locks, but he has remained incredibly prolific – releasing albums, inspiring tribute acts and even a dedicated music festival in Sweden known as Muskelrock.

“What keeps me inspired?  It’s that spark of concepts and ideas that keep coming into my brain. I’m always writing songs or coming up with products I want to move forward with. In addition to entertainment, I have a sports apparel company that puts out incredibly wild vintage hockey and football jerseys and caps. We put on sports events at arenas that combine rock concerts and hockey games. I am interested in how technology is advancing at such a fast pace. So you could say I am in the Sports, Entertainment and Communication industry.

Muscle Rock is the strongest metal festival in the world and is held every year at Alvesta, Sweden. It’s promoted by my great friend Jacob Hector, and we were the first headliner to launch it in 2009. It is named after my genre of music which is also called Muscle Rock. Incredible bands perform there and people come from all over the world to attend and share the experience.”

The documentary film will be appearing at the New Zealand International Film Festival  this year, are there any plans for an Australian screening?

“I’m very happy that the film is at the NZFF this year. The movie also just got picked up for worldwide distribution by MPI Media in Chicago and I have also been signed to Cleopatra Records in Los Angeles.

We are currently planning an extensive tour where the movie is shown first and then myself and the band come out to do a live rock concert. So we will be doing cross marketing with this multi-media performance throughout the world. I have never played Australia and hope to do so next year.

We Live To Rock!”

And with that, he is gone… the scent of an immortal still lingering in our trembling nostrils.

Get your THOR fix here from Cleopatra Records.