The French were rallying and the English were restless. A frisson of anticipation filled the air as the inevitable clash drew nearer. Who would triumph? Would the pages of history be re-written? And what exactly did this card do? All would be revealed.

Round One- The French Troops lay snug in their plastic tray as battle commenced. Bravely I laboriously pored over the contents of the core box as I scanned the scenario booklet, trying to scry the meanings of abundant icons and identify the allegiances of tiny, tiny dudes.

First onto the field of battle was…the field of battle. Each tile selected, then placed, and re-placed as numbers were heroically checked and angles valiantly aligned. After this initial charge a dramatic follow-up was ordered whereby evocative pieces of what appeared to be broccoli (not to scale) were placed atop the tiles, signifying terrain and helpfully rich in vitamins.

Round Two- Which bit is this? The leaders pondered their options in the heat of battle. Surely, part of any good general’s toolkit is a firm grasp of logistics and yet, on the eve of battle even Napoleon himself would grow pensive as he realised that there weren’t enough coloured bases for his troops. Improvisation rides to the rescue and with a fistful of francs we summon a retinue of magic markers.

Round Three- The shuffle of battle is always relentless. The shuffle of cards even more so. Often in the heat of conflict it’s hard to determine friend from foe. Or which of these dudes on a horse is ‘Pierre Longbread’ – an essential component of this scenario. Inspecting the ranks of our troops we match their banners to bases and beyond in a feat of administration fit for bardic heraldry. Night falls. 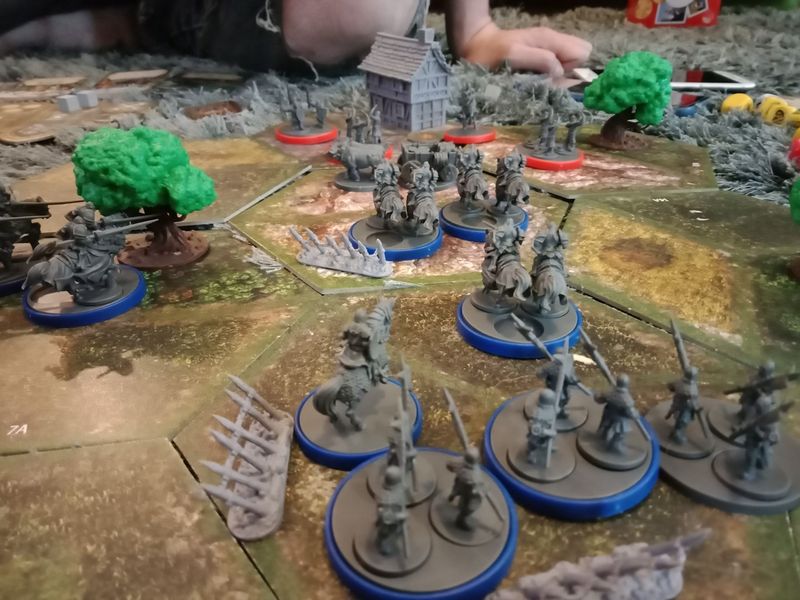 Round Four- They say innocence is always the first casualty of war. In this case the civilians that traipse the battlefield, trying to go about their lives, or remember why the fishmonger looks so much like the blacksmith and why their home is in a different box. Still – from the jaws of defeat we gloriously triumph by penetrating the defenses of the second box shrink-wrap and plunging into the contents beyond, uncovering the reams of hardly essential bounty within and tabling a conference of the generals dedicated to sorting them into piles. Then the cat eats one of our archers, mewling in alarm as we retrieve it from a salivary grave.

Round Five– Many battles are fought for territory, in this case the territory to display the battle in its entirety. The flow of the melee descends from the table to the floor as we lay out the infirmary for the numerous atrocities that are sure to mount in this epic, stoic endurance test. During the transition tragedy strikes as a band of pikemen are lost in the shagpile carpet and our brave leader steps on one in bare feet. The first casualty, but surely not the last on this dark day.

Round Six –  Many wars are fought for glory and there would be heroism aplenty on this day, as banners were raised in triumph and long held grudges were put to rest. We take out our mounting bloodlust on the remaining punchboard as the forces of ‘circular disc’ fall one by one. We prepare sandwiches to keep morale up.

Round Seven- The scanning of the fields! The clatter of cubes! The tumbling of dice! The trip to the corner store to buy putty as one-by-one our troops initial advances are curtailed by constant unexpected tumbles from their bases! The poor soul’s legs giving way in the gonad-shriveling terror of the charge and the eschatological meta horror of too-loose bases. Truly war is hell.

Round Eight- At last the hour is nigh. It seems an eternity since we marshaled here on this field of enmity to pit steel against steel and sunder the flesh of our nemeses. Surely this is set to be a battle for the ages. At last the anticipation will crest in a thundering climax as we ride into the very annals of history…

…After four moves it seems the French appear to have triumphed. We scan the rulebook for clarification. It has been 22 minutes since we actually crossed swords. There is no time to celebrate. We need to pack all this shit away and there are only six hours ‘til dawn.

Time of Legends- Joan of Arc is big game.

Perhaps you’ve seen the photos of the all-in pledge, helpfully perched next to a menhir for scale?  Or you accidentally qualified for a discount bus pass whilst watching an unboxing video? I went for the bare minimum paupers bid myself and the three boxes I received still blocked out the sun, but I can’t deny the giddy atavistic thrill of delving into such a corpulent beast.  Pulling out piece after piece and marveling over the staggering number of miniatures, cards and tokens that kept emerging from the trio of cardboard maws was a big hit with my lizard brain.

With each eager fistful of plastic however, my mood started twisting from ‘conspicuous consumption serotonin bomb’ to fretfully cataloging the sheer logistic hurdle I had just invited into my home. Was I feeling…stressed out? How was I meant to transform all of this stuff into y’know…a game?

Thankfully, the core mechanics at the atrophied heart of this colossus are mercifully straightforward. A wargame/boardgame hybrid utilising epic scale models, it errs pleasantly on the boardgame side of the fence, with nary a tape measure or ruler in sight, flaunting their gateway to arbitration debates and tendency to knock scenery into the dip. Featuring a neat twist on symbol matching dice-based conflict, your clashes will be fraught with an excitement that is instantly easy to parse and soars above the ‘roll high to wound’ legacy of its Skaven-infused cousins. A similarly clever system of activation cubes offers both strategic nuance, whilst ensuring the battlefield is easy to read at-a-glance, keeping the sweep of swords swift and the rain of bolts plentiful. Stir  these robust bones in with the numerous scenarios, generous spread of units and twin thematic poles of history and myth, and it seems there are acres of possibility teeming within these groaning chests, begging to be explored.

In short, its ambition cannot be faulted.  It’s in the execution that this heavily plated warhorse stumbles. Like a mounted knight wielding both lance and banner at a gallop, its balance is suspect.

The scenarios were the issue. Each one replete with situational exceptions, one-off rules, idiosyncratic victory conditions and seemingly all teetering on the knife edge of imbalance to the point of being broken.

Straddling the expanse between historical revisionism and mythical flights of fancy, these scenarios can be loosely grouped into two camps- the historical affairs featuring a pleasing cliff’s notes potted history of the conflict in question, and the mythical battles drawing upon the belief sets and reality tunnels of the age to play at ‘what if’ with angels, demons, djinns and dragons. On top of this, the game offers its ‘battle mode’ in a nod to becoming a fully-fledged wargaming system, complete with army lists and point values for units which remains frustrating incomplete and undergoing a similar dance with editors, as errata and FAQ’s come tumbling from the desks of harried scribes faster that you can cry “Zut Alors!”

In all honesty, this rambling ode ought to labelled ‘first impressions’ rather than any kind of in-depth analysis, as after an initial three game session and a follow up two game romp testing an alternate scenario, the massed ranks of Time of Legends bid a tactful retreat to my shelves where they have sat perched with intent in turtle formation, gathering the expansive patinas of dust that befit such a hefty trio of boxes ever since.

But honesty I believe that’s telling enough in its own fashion. Although it could never be denied that it looks glorious upon the table, this is a game that, and I cannot stress this enough – TAKES LONGER TO SET UP THAN IT DOES TO PLAY. It has knocked pretenders to the throne such as previous champion Gloomhaven into a cocked hat when it comes to excelling at laborious preparation, and whilst I’m certain that this burden could become eased with the optimisation of familiarisation, it still imposes a hefty speed bump upon the aspirational road of any relatively clean-shaven gamers who don’t hail from ye olde town of Grognardia. Similarly, the brevity of its bouts and rules-light essence probably render it too flimsy an affair for the hex and counter crowd as they continue to coo over their Gettysburg chits and contemplate weather effects on marching speed until they climax in cross-referenced ecstasy.

In the end, much like the Maid of Orléans herself, it seems doomed to an unjust fate. Torn between God and the nation of France, it cannot serve two masters. And whilst it’s unlikely to end its life upon the pyre, for many gamers it may well end up doomed to an even more ignominious end, as it sits static and brooding in its cardboard mausoleum, and the unrealised limbo of “one day”.

You can Late-Pledge for the 1.5 edition of Joan of Arc here. Well…maybe you can, there’s an ongoing IP dispute that might throw a baguette into the works, so sign up for updates if this seems like your kind of thing.