Shortly after the tolling bells and strident drum beat that announce the arrival of ‘Cavity: First Communion’ off Christian Death’s groundbreaking debut LP Only Theatre of Pain come rolling and unfurling out of the speakers, the world was introduced to the voice of the one and only Rozz Williams. That seductive, iconic voice.

“Let’s skirt the issue of discipline” it intones, dripping sex.

It’s probably my favourite vocal tone of all time, and although it would evolve across subsequent albums, it retains that same breathy intonation and antagonistic aristocratic air, with increasingly gilded baritone edges developing across Catastrophe Ballet and Ashes, reaching its velvety apex on Shadow Project’s sublime From the Heart LP. Shades of Bowie and Marc Bolan certainly, but more specifically, Donovan.

Allow me to elaborate.

Rozz was never shy in extolling the virtues of Alice Cooper. A formative influence and the original death rock icon, Alice blazed a jet black trail across the 70’s, infecting the fertile imaginations of a generation with his vaudevillian take on Grand Guignol theatrics and tongue in cheek splashes of the sinister. 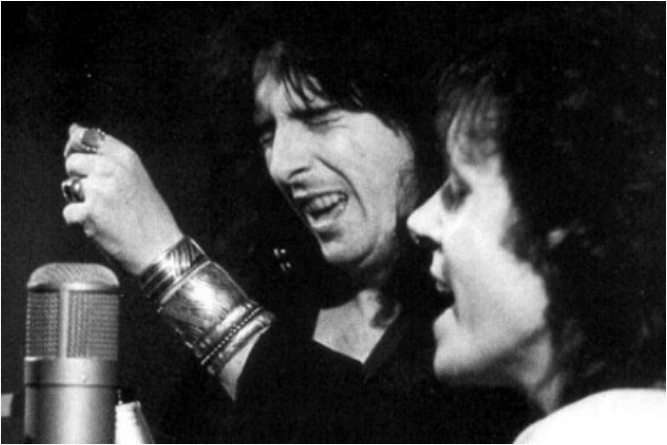 Listen closely to the first chorus. “We go dancing, nightly in the attic when the moon is rising in the sky.” Who does that remind you of? Take it to another level of intensity, pepper it with the earnest delivery of youth and voila. 1334! Now whether consciously or not, Rozz Williams was listening. Consciously or subconsciously he imbibed that tone. He drank it in. It infiltrated his bones.

Speaking to Ultimate Classic Rock.com, Donovan recalls “Once he (Alice) figured out his approach, I went in with this piercing falsetto and sang, ‘Biiillllion dollllar babbbbieeeees.’ I can do things with my voice like that,” Donovan continued. ‘Alice said, ‘That’s it, man. Let’s record.’ I think I did about half the vocals on that song. I have met Alice again over the years. It was really extraordinary to be a part of that song. ‘Billion Dollar Babies’ went to No. 1. I also did the talking part on the song: ‘We go dancing nightly in the attic.’ It was all like a horror movie; it was all tongue-in-cheek. I love Gothic mysteries. It has that spookiness.”

“If I’m too rough tell me I’m so scared your little head will come off in my hands.”

“Let’s skirt the issue of discipline.”

Psalm is just a spooky Atlantis.

Andi Lennon is Sydney based writer, musician and soap dodger. He graduated from Wizbang University with full honours and no teeth. When he isn't feeling conflicted about Morrissey he likes to drink box wine. View all posts by Andi Lennon