When did people stop airbrushing Wizards onto panel vans? When did teenagers stop blazing up in their bedrooms beneath blacklight posters of dragons? When did our collective design aesthetic become so fucking boring?

In a world of clean sans-serif and minimalist uniformity, it turns out there are still pigment-smeared goblins daubing psychedelic murals, giggling maniacally over inks and creating worlds you can get lost in. 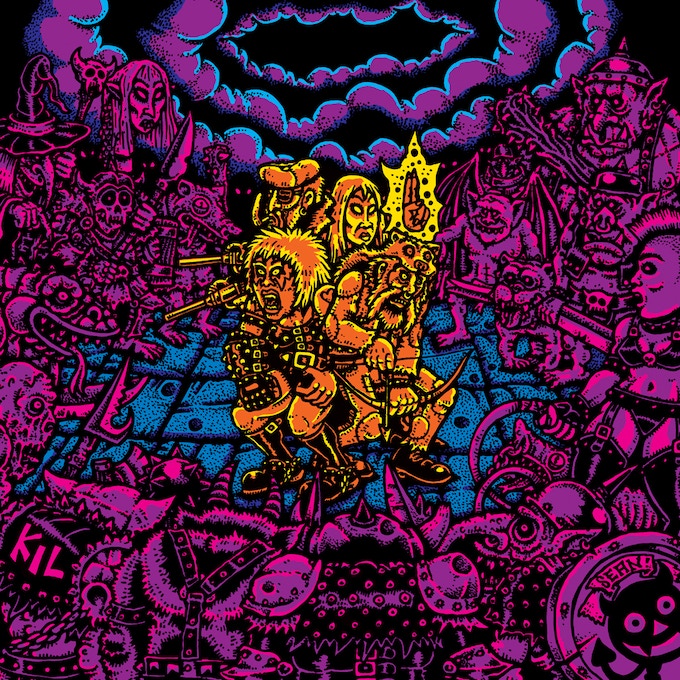 One of the foremost practitioners of this still vital aesthetic is Sean Aaberg and the lowlifestyle merchants at Goblinko.

Purveyors of delightfully intoxicating filth, Goblinko’s output has been largely a showcase for Sean’s eye-searing, wall-melting, flashback-inducing art that recalls the heady days of Robert Crumb, Ed Roth and Ralph Bakshi but with added hints of Oldhammer ala John Blanche via Bolt Thrower.

Active in fanzine circles since the early 90’s, most notably with PORK MAGAZINE, Sean and his cadre of misfits have in recent years spewed out an increasingly prolific day-glo smear of game development and publishing, along with a host of other rad items and merch including patches, stickers, pins, pewter miniatures and…grave dirt. 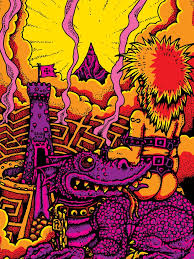 Teaming up with fellow berserker Eric Radey, in 2017 the duo released Dungeon Degenerates on an unsuspecting gaming scene that was in danger of growing predictably pedestrian in its soporific parade of Tolkien-isms. Drawing upon classic 80’s board games and pen and paper role playing games, Dungeon Degenerates is a poisonous hotshot of nostalgia, dangerous fun and bad juju. A sinister mashup of punk rock flyers, 80’s metal album covers and DIY DNA, it left me smitten upon first sight and wracked with an uberwhelming urge to draw demons on my pencil case.

The art totally sells this world, and you can spend hours just poring over the fetid swamps and brimstone plateaus of the Wurstreich before a single die even tumbles, drinking in the depravity as you’re assailed with visions of vermin hunters, carnival drifters, witch-smellers and sex dwarves. It’s sus as fuck.

Now, with a successful crowd-funding campaign and several re-prints under their studded belts, they’ve returned to the Kickstarter well with a follow up game Dungeon Breakout and a kick-ass hardback compendium of Sean’s art called Acid Vomit to sate your need for the subversive like the salivating dogs that you are. 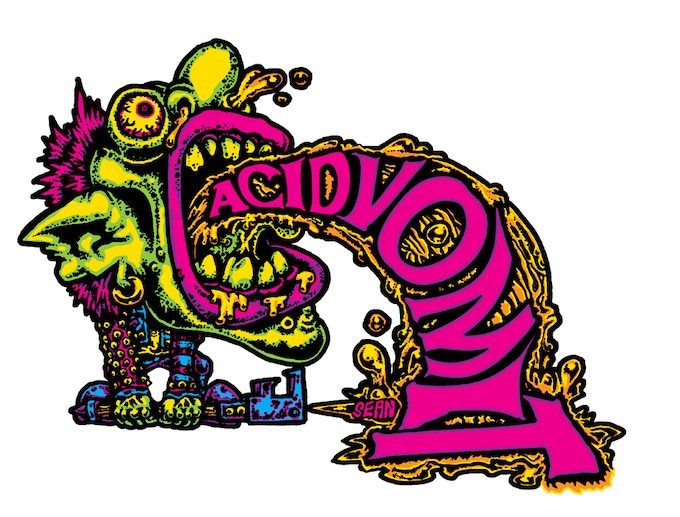 Both game and tome are slathered in retina shattering renditions of the degenerate denizens of the Wurstreich and more, with Acid Vomit featuring his original artwork from the last twenty plus years, in a range of styles, from initial concept sketches to completed artwork, showcasing drawings from many different published projects, including some never before seen work.

Dungeon Breakout offers a simpler take on the Dungeon Degenerates formula, designed as it is to be enjoyed whilst too full of cider to grok a convoluted string of rules and systems. Stripped of it’s bigger brother’s pungent depths, it’s been whittled down to its fragrant bones so you can just retch and roll.

With the spectre of COVID-19 currently blanketing the earth, this is the perfect time to score some indoor entertainment whilst supporting creators on the precipice of uncertainty. Sean himself is currently recovering from a major stroke he suffered in September of 2018 and by throwing in for this stuff you not only support his ongoing recovery but ensure more twisted shit will come our way in future days.

Plus it helps save us from more Wizards of the Coast style banality, a riposte to sub-Frazetta box factories in a scene that should be dank, dirge-y, spun-out and fucked up.