The scent of antiquity overwhelmed us as we pried open the crypt lid. It was the stench of the tomb, of dust and decrepitude, of mystery and malevolence, of memories unexpurgated and left to fester.

But mostly it was the stench of cardboard.

“Who goes there?” boomed a threatening timbre. “Who dares invade the sanctum of Nyntighneytisyx”???

“Well then” cackled the disembodied voice “I bid you welcome. Step inside and stay awhile. Leave your shoes at the door, sign this waiver and LOWER THINE EXPECTATIONS!”

Gingerly we complied, piecing together a six-piece array of beautiful boardstock until a linework labyrinth unfolded on the floor before us.

“As you trudge through my domain you will be beset by three curses, each more unyielding than the last!” continued the resonant baritone.

“Hang on a minute” we paused “that sounds pretty shit, who are you anyway?”

“Oh, terribly sorry, where are my manners? You may call me ZAGOR!” replied the voice, dripping in cavernous bootleg plug-in reverb.

“Hahahahaha Zagor? Zagor! Fucking hell you must have copped it at high school”.

“SILENCE!” he intoned with pantomime relish. “I hereby beset you with Curse the First. The curse of Random Ambulation!” 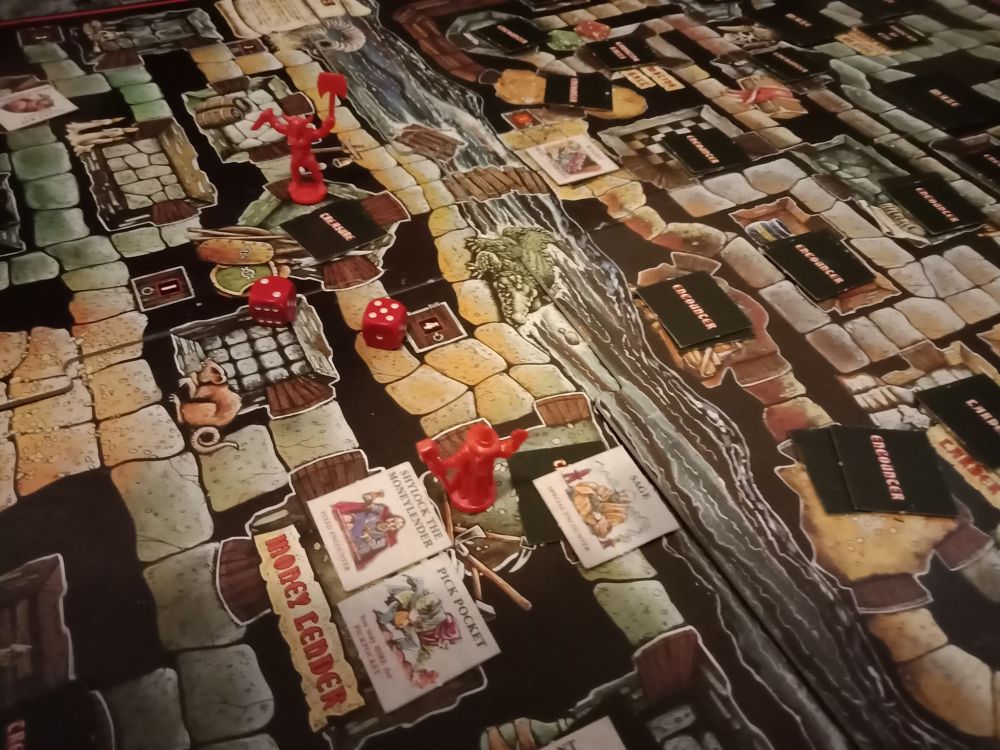 Unleashed by a fledgling Games Workshop in the year of our lord 1986, The Warlock of Firetop Mountain is, of course, a port of sorts of the wildly successful inaugural Fighting Fantasy Gamebook of the same name first ushered into the world four years prior. My nostalgic tumescence for this particular series of gateway drugs is already well documented so I’ll spare you the whole wistful flashback routine here, but suffice it to say that I was pretty excited when this relic landed on my doorstep with a flourish and thud one cloudy lockdown day. 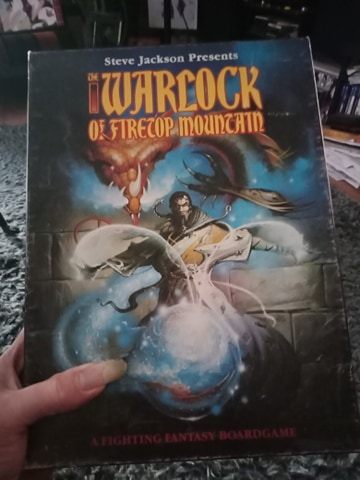 Defiantly and unapologetically a product of its era, it immediately brought to mind the wisps and recollections of crap caravan holidays spent playing Talisman with my cousins. Long afternoons where the world spun on the axis of a d6 as we pitted strength and craft against the machinations of random chance. And so it is here. Like the journey for the Crown of Command and its many brethren of the era, this is a mechanically simple affair whose value lies in the emergent stories that unfurl as you play and the surprising relish with which it facilitates the acts of utter cruelty you can inflict upon your friends, as you seek to be the singular victor and claim the titular Warlock’s cachet of loot.

This is seriously no-holds-barred PVP that rewards cunning and rank shittiness to your fellow man in a fashion that has probably instigated any number of delightful table-flipping, therapy-recalled, formative meltdowns over the years.

Case in point. During our play-through I had managed to acquire a lucky hand of items and mystic McGuffins with which I was positively sauntering through the various perils hewn into the catacomb and stone. My opponent however had been dealt a bit of a bum deal in that regard, but fortuitously for him, the character he had rolled was good deal more powerful than mine and sure to best me in any one-on-one confrontation as he relished in the wild imbalances baked deep into the crust of this antique pastry. One of the coolest elements at play here springs from a single unassuming paragraph in the rulebook that firmly encourages players to engage in bartering, deal-making and treachery. The added meta-game this enables is the actually the spiciest potato in this backwards bakery treat.

With this in mind, about a third of our way through the game he turned to me, face fixed with the arch-capitalist grin of the garden variety real-estate agent and informed me gleefully that if I didn’t surrender to him my Pipes of Slumber then he was in no uncertain terms going to dispatch me post-haste, and merrily leave my corpse for the kobolds.

Knowing a good deal when I see one, I reluctantly acquiesced, but not without the caveat “yeah okay, but I think we need to be in the same space to trade items”.

AND THUS THE TRAP WAS SET.

Bluff and double bluff danced with chicanery as I surreptitiously flipped one of my other item cards and made a discreet note on my character sheet.

‘While carrying the poison card, an adventurer may poison another adventurer in the same space. The next time the victim eats provisions, the poisoner can then declare that the victim has been poisoned and the victim must lose 4 Stamina’.

Oh how I struggled to keep a poker face as my inner Machiavelli sat sated with a ludicrous grin.

My opponent remained oblivious to this duplicitous turn, focused as he was on stroking his shiny new pipes. That was until, several moves later when humbled and exhausted after a somewhat Pyrrhic victory against a vampire, he found himself sitting perilously close to death on FOUR STAMINA POINTS.  I’ll let you work out what happened next, but I will reveal it was lucky we were playing on the floor so as to proffer no table for the flipping. It was fucking glorious. Peak Schadenfreude.

“Hahahaha” boomed the voice of Zagor once more, clearly enjoying himself. I now unveil my second blight! The curse of untimely endings!”

With my opponent having choked on his own hubris (and poisoned rations) he was left with the booby prize casually parcelled out by seemingly all games of this era – Rolling a new character and starting from scratch, whilst I sat smugly straddling a seemingly insurmountable lead from the dusty end of the dungeon. This demoralising position was adopted with a hang-dog diligence and sense of duty, but the spirit of fun was rapidly escaping from this particular balloon with the subdued squeak of a wet fart.

“Ahhhhahahahaha” pealed Zagor’s petulant pipes once more, “now you have come to see my curses three. Curse the third! The curse of time dilation!”

We had both noticed it was getting pretty late.

It was still entirely possible for my opponent to prevail should I stumble at the final hurdle. It was also equally possible that I could recover and again nose into the lead should he too pull a metaphorical hamstring negotiating the warlock’s maze or dueling with its paltry menagerie of denizens. In either case however, any drama inherent in the seesaw sway of our twin fates would be dwarfed and rendered impotent by the sack full of doorknobs swung by the sheer amount of time this was now taking. And we’re not talking ‘blink and three hours have elapsed’ time like the kind conjured by a good session of Twilight Imperium. We’re talking “I rolled another one and there are still fümfty spaces between me and any remaining objectives” time.

Zagor was loving this, tenting his fingers with glee at each exasperated sigh we uttered as we succumbed to his trio of banal bewitchments. 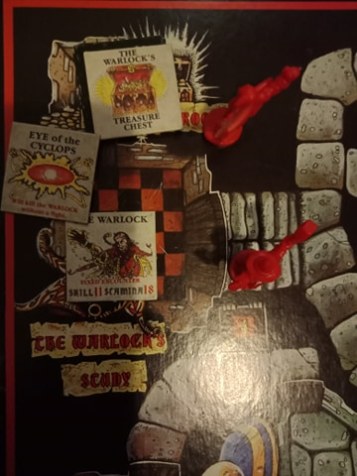 Like a cogwheel construct brought to arcane life though, there were some hints of ingenuity at play here. The sting of rolling that damp, demoralising ‘one’ is lessened by the ability to perform a free ‘key check’ when such snake eyes blink. Scattered throughout the dungeon are a series of keys, each with a different number. These are used to unlock the three combination locks that bind the Warlock’s treasure and truly win the game. At the outset of proceedings, each player receives a selection of these numbers with the three that remain unused therefore forming the combination to the (war)locker. You know which numbers you hold, and in performing a key check you can command another player to reveal if he or she is holding another number you arrive at through the power of deduction. A sequence of successful guesses will see you eliminating the other possibilities and identifying which keys you will be required to possess before you make the final desperate dash to the Warlock’s boudoir.  This quite simple element of deduction forms a big part of the game, as players juggle the need to stay in one piece, with the need to acquire keys, all whilst cannily deciphering the code.

This led to the second most hilarious part of our evening whereupon my opponent somehow decided that three and three were five and therefore wrote down a four-digit code, (I did say it was late), allowing me to snatch an exhausted victory at the last moment with my amateur cryptography skills proving somewhat more robust in the (almost literal) eleventh hour.

I stood victorious amongst the Warlock’s bounty, flinging fountains of silver skyward as I graciously maligned my opponent’s mother’s virtue in our customary end-game fashion when suddenly the voice of Zagor filled my ears once more, softer and more distant this time.

“Well done mortal” it cooed, “would you like to play again?”

The fact that this one didn’t receive the same new edition and iteration treatment as Talisman, Dungeonquest and other titles of its vintage ilk is pretty telling, but by remaining trapped in amber it perhaps does a better job of encapsulating and defining an era. The artwork, although stymied by the minuscule scale of the cards, is awesome. The sculpts of the plastic minis are squat and static in just the right way. The whole package has a certain allure to it that you’ll either surrender to with a swoon or shrug off in dismissal, depending entirely on your own story-so-far with gaming. And while it might fail as game in 2020, as a collector’s piece, curio, slice of history, and a tattered box of object d’art, it’s nigh-on essential.