One has to wonder what xenophobic neuroses-vessel and famed mummy’s boy Howard ‘Poontang’ Lovecraft would have made of the current ubiquity of his mythos and creations. Far from the days of struggling to find purchase in the ink smeared pages of pulp magazines, the rise of Dagon from the depths of his watery lair to encompass everything from be-tentacled plushies to Fhtagn Yahtzee and The Dream Flakes of Unknown Breakfast (rich in Folate!) would have been an unthinkable proposition as he brooded in his Rhode Island loft, busy being fastidiously racist and not getting laid.

Stripped of their cosmic import and otherworldly strangeness by virtue of their familiarity, the deep ones now dangle from our rear-view mirrors and adorn our knitted onesies as we sip Cthonic Cocktails beneath a castrated gibbous moon. No longer the unpronounceable otherworldly entities that compelled us to shiver as the dust of the ages settle upon our spines, more a kitsch approximation of wyrdness – distilled, corked and labelled as the funnel to monoculture consciousness clipped their scaly wings with its narrow and unforgiving rim.

The world of tabletop gaming has been particularly enamoured with this particular goo-drenched touchstone, revisiting it with an insistence that verges on the compulsive as the well-worn cobblestones of Arkham surrender to a volume of foot traffic that weathers its edges and chokes its byways.

Into this foaming throng strides yet another robed acolyte in the form of Adreama Games’ Machina Arcana, and this time it’s adorned with the cogwheel trappings of a steampunk aesthetic to try and distance itself from the tommy-gun and fedora sporting crowd of the roaring twenties that has seemingly settled as the default dressing.

More ambitiously, it seeks to bring back the dread. The suffocating, cloying sense of tension and doom that pervades an encounter with unspeakable eldritch beings from beyond time and space. The mind-flaying discombobulation and psychic unravelling that would surely occur in the face of such inscrutable oddities whose very existence shatters all the precious illusions upon which our assumptions, both scientific and theological, are founded.

All told, it’s a lofty beam to vault for. And it makes a better fist of it than some.

To my mind, the gold-standard for this kind of understanding of what makes Lovecraftian fiction tick and successfully shackling it to a mechanism for play is exhibited by runaway indie darling videogame (and soon to be tabletop offering) ‘Darkest Dungeon’ with its focussed and best-in-show take on madness and neuroses.  And whilst Machina Arcana doesn’t attempt this kind of thematic consistency with its inspiration, it does at least purport to make things scary again. This time via stacked odds and a creeping sense of escalation that threatens to overpower even the most well-armoured and blunderbuss-laden steamy boys.

Familiar at even a cursory glance, Machina Arcana is first-and-foremost a dice-chucking Dungeon Crawler replete with the loot collection, narrative story beats and player elimination that are the hallmarks of the genre. It sits comfortably amongst similar offerings such as Mansions of Madness, Descent and Warhammer Quest et al but with a focus on responding to contingent threats that recalls Eldritch Horror’s frantic race to seal gates before your ambitions become fatally octopus-clogged. My copy is of the 2nd Edition “premium” set and having not played the first iteration I can’t really comment on how the mechanics may have evolved but I will say that in gussying up the components between outings they have trowelled on a sheen of opulence that both enhances and obscures.

The addition of larger cards and sturdy double-layer player boards is a fantastic evolution, but in what may be a contentious call – I’d trade them in a heartbeat for the reinstatement of the first edition’s art.

Under its initial Miskatonic guise, the monster cards and standees that are so vital in conjuring the desired sense of the unease and dread came plastered with a selection of fantastically creepy and evocative black and white linework illustrations that positively screamed with a stark beauty. Their hand-drawn ink outlines were both visually alluring and stylistically vague enough to embody the unknowable in a way that left your imagination to buffer in the blanks – pallid visages triggering a sense of the occult and obscure that recalled the obfuscating early days of satanic panic D&D modules, as well as more contemporary takes such as Cave Evil, Escape the Dark Castle and Cryptic Explorers.

Fabulously moody, their two-tone impact also served to stand out when perched atop the gameboards, where they seemed to pop out of the murk, rendering them both thematic and practical whilst simultaneously standing out from other offerings in what is a crowded genre and brainspace.

The second edition, by contrast has opted for more ‘professional’ looking art that is deeply competent and equally generic, as its photoshopped edges blur into the thousand other offerings that ape this style. It’s slick and glossy and absolutely top shelf amongst this kind of offering, technically superior and still inviting but I miss the idiosyncrasy that its more homespun antecedents offered. 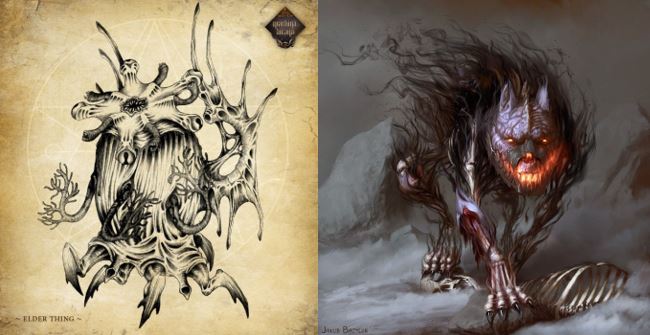 This glossy sheen and air of professionalism extends to the entirety of the components nestled within the box here. Card stock is thick, tokens are chunky and the proprietary dice sets are both beautifully ornate and pleasingly functional as they determine your fate at the conclusion of each round.

At the outset of proceedings, players will select their champion from a diverse range of protagonists (bolstered by the premium edition) that embody classes or archetypes such as the Bruiser, Crafter, Shooter and Mystic. Balancing your party’s aptitudes is essential, as during their sojourn through the depths they will be assailed by horrors both physical, ethereal and arcane, with communication and delegation being paramount to corral and control the onset of bestiary entries as they shamble onto the board. In order to progress the story, unspooling via a series of narrative chapter cards, players will need to balance their exertions and focus, as they co-operate to complete mission objectives whilst both exploring and maintaining the growing threat that comprises the games mounting tension.

Each of the semi-modular dungeon/crypt/cave/lair tiles is festooned with chests to plunder, diary entries to scry, workbenches to commandeer and – coolest of all- trap mechanisms to trigger. These aren’t the punishing pit-traps and spiked darts of the creative commons that assail players at the flip of a card. Instead they form one of the most satisfying tactical elements of the game, as players can opt to trigger them at the cost of stamina, a well timed flick of the wrist immolating a handful of oppressors in one fell swoop, but not without the risk of friendly-frying a companion or two in the process. 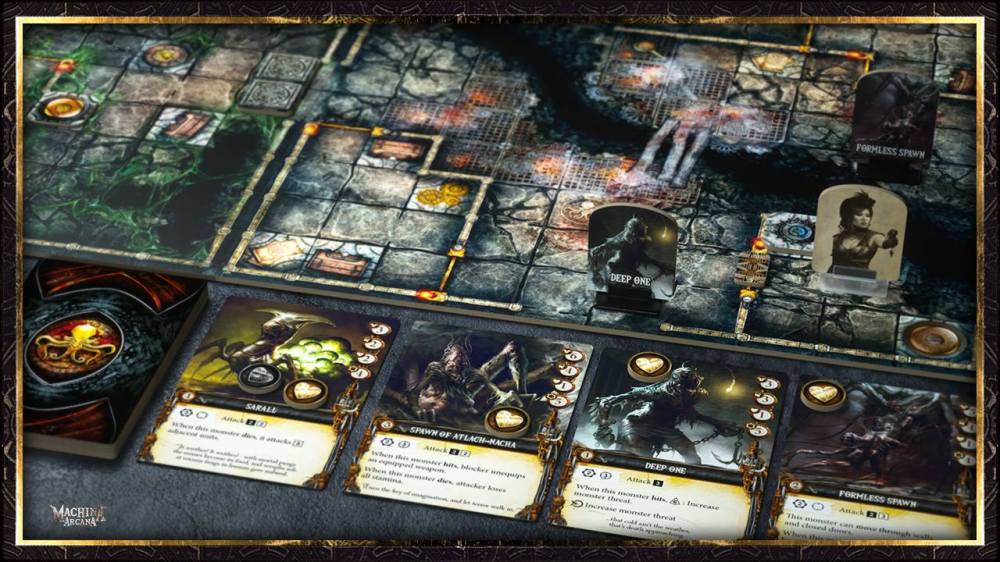 This sense of tactical positioning, risk and stamina management loom large over proceedings as whole. Exploring and interacting with any of the aforementioned features and furniture both costs stamina and grants ‘Essence’ – the currency required to both trigger story events and mitigate dice rolls.  Stamina and Essence will also be used to conduct attacks and utilise each player’s abilities, whether granted by their starting class or the abundance of items, weapons and armour on offer as you loot n’ shoot your way into dead but dreaming destiny.

At its best this makes for a tense and tactical exploration of your options as you prioritise objectives and struggle to keep waves of monstrous abominations at bay, with your agency always straddling the chasm between fight and flight as pragmatism dictates.  In certain instances however, the randomness baked into the spawning of both beasts and items can render you a bit of a behemoth, which robs the game of the teeth it has so carefully sought to cultivate.

Those same teeth are sharpened at the conclusion of each and every round, as after both players and seafood have taken their turns, each player is compelled to conduct a duo of rolls on the ever-ratcheting threat tables that form the vaulted beams of this pipework cathedral.

Roll higher than the threat number and a fresh, gibbering abnormality is launched from the Gauntlet-style spawn portals that dot the boards. Roll higher and you reduce the threat number by one, ensuring an increased probability of their arrival on the next roll. A second track similarly triggers ‘horror events’ that are drawn from a generous deck of debilitations and debuffs to hinder you, adding a slight film of thematic dressing whilst threatening to derail your carefully plotted trajectory with each occurrence. The game is absolutely at its best in these moments when players feel overwhelmed and outnumbered, and the mechanics of mounting stakes are probably the cleverest element at play, as you race to wrest a modicum of control from the roiling fog of chaos that threatens to consume you, lending a much needed sense of urgency to proceedings as your opponents both multiply in number and strength as events unfurl. 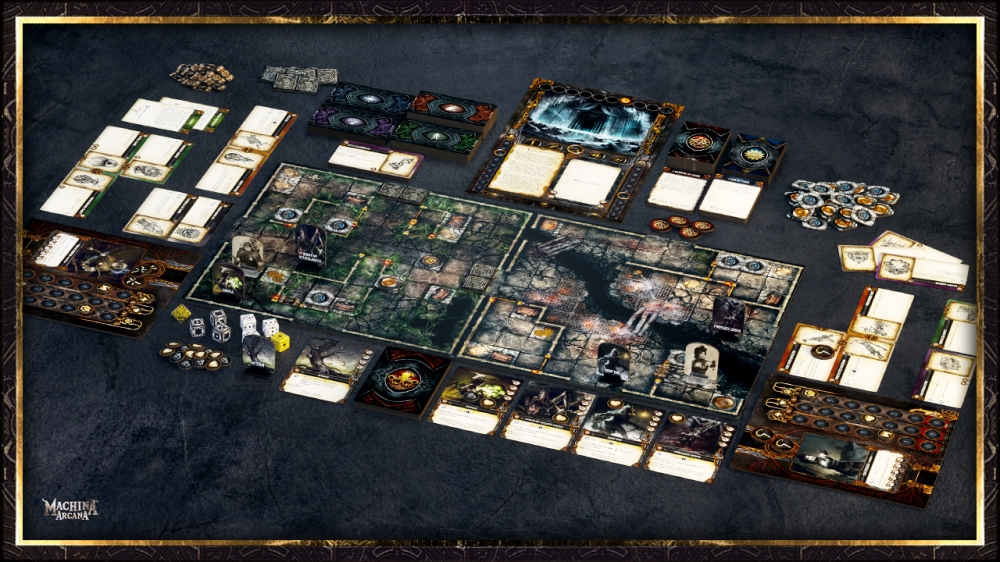 It still runs long though. The story cards that bookend each chapter form the rhythmic punctuation of your tale and can flit along in both rapid or glacial fashion depending on the whims of card and dice. The prose here is full-on double-ply velvet royal purple in style and succeeds in setting the scene whilst simultaneously failing to offer much of a framework or motivation for who any of these people are or what they hope to find amidst the abyssic debris of these embroidered brass mazes.

There are three scenarios in the core box (with an additional two in the premium edition), some of which come with additional end-game flourishes/minigames which I won’t spoil here, and in our experience they can take around 3-6 hours to complete. Our first expedition into the ice was split between two evenings, and thankfully, it isn’t too hard to keep track of your progress, stats and inventory whilst re-boxing and reclaiming the floor between sessions. Hopefully the other scenarios we are yet to explore offer a variety in mechanics and scenarios as well as additional gothic literature to wade through, bolstering our reason to return, and at this early stage, yeah- I want to play again.  There’s always something to do, turns tumble by quickly, and the urge to unveil the next event is enough of a hook to entice- at least initially.

So… a true sense of horror in boardgame form? That prospect remains tantalisingly out of reach and is perhaps a unicorn we’ll never truly harness. A cool, atmospheric adventure complete with enough tactical agency to engage and morbid motifs to enthral? That’s perhaps a more manageable ambition, and Machina Arcana realises it in a puffy jet of eldritch steam, even as its boots fit snugly into the well-worn footsteps of its many progenitors.

What would Lovecraft make of it all? Well-it probably makes for a good solo game. So if you have no friends, add an extra point for thematic verisimilitude as you retract the attic door flap behind you to secure hermetic solace and block out an outside world full of terrifying other cultures and women who aren’t your mother. 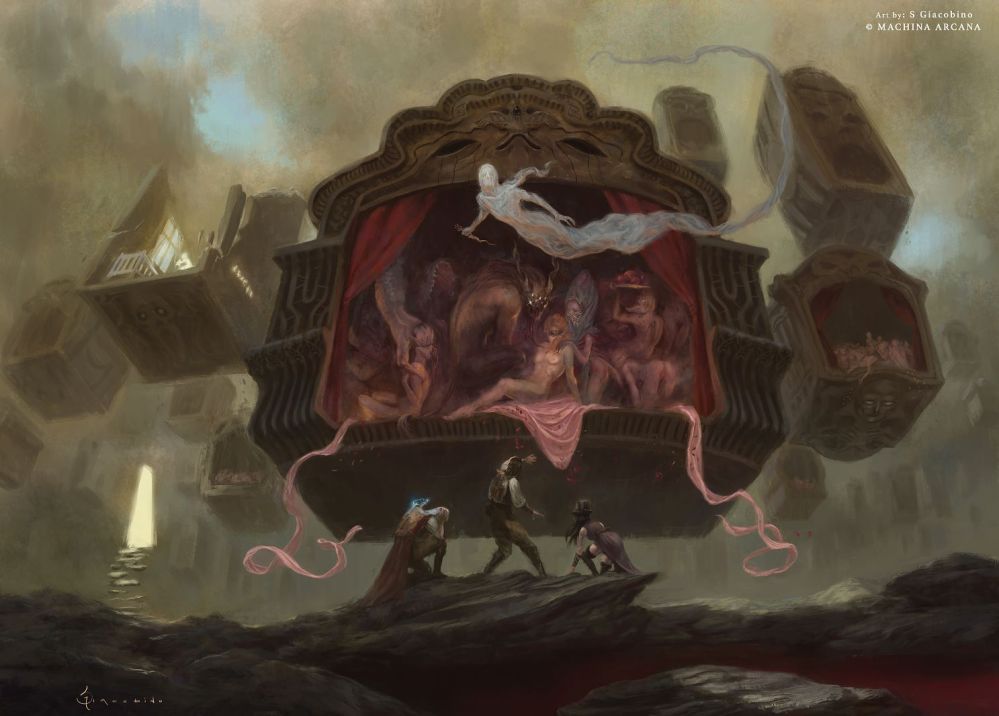 Delve into the madness here.