“Some years ago—never mind how long precisely—having little or no money in my purse, and nothing particular to interest me on shore, I thought I would sail about a little and see the watery part of the world. It is a way I have of driving off the spleen and regulating the circulation. Whenever I find myself growing grim about the mouth; whenever it is a damp, drizzly November in my soul…then, I account it high time to get to sea as soon as I can. This is my substitute for pistol and ball. With a philosophical flourish Cato throws himself upon his sword; I quietly take to the ship. There is nothing surprising in this. If they but knew it, almost all men in their degree, some time or other, cherish very nearly the same feelings towards the ocean with me.”

Ishmael was right, his musings universal. Whether in its proximity or in its absence- that vast untamed beast the sea remains a commanding, bewitching presence. The last true mystery. The font of a thousand stories and the eternal backdrop for harrowing heroism and ambition-dwarfing scale. Briny old dogs with a flagon full of tall tales mass at its corroded lip to share rimes of all the myriad woes and wonders that have transpired upon its surface, and to ponder with relish and reverence what may yet lurk beneath that infinite blue-green canopy.

Oh to see beneath this glittering jewel. To upend its vast, suffocating brimful and cast an eye below, to the shoals and shores yet unexplored, where the refuse of the ages gathers sifted, and leviathanic graveyards dot the horizon.

And here, as in all things – it is wise to be careful what you wish for.

Emerging out of the unyielding chrysalis of the ongoing Old School Renaissance, Best Left Buried by SoulMuppet Publishing is one of many recent contenders vying to put the mystery, the darkness, the plague, death and madness back into forefront of the fantasy roleplaying genre. Originally published in two slim volumes, and recently compiled into an expanded and deluxified hardback, this rules-light take on proceedings borrows from the likes of Call of Cthulhu in its attrition-with-madness take on sanity, Dungeon Crawl Classics in its largely expendable roster of Player Characters (or Cryptdiggers), and any number of other indie darlings in its predilection for obtuse theme framed within the familiar setting of a cavernous delve circa 1974.

In keeping with its brevity, the agency of creation is thrust firmly at the feet of the GM (or Doomsayer, in the game’s own delicious lexicon), with the over-arching premise resting entirely on the notion that expendable groups of mercenaries gather in camps at the mouths or lips of yawning crags and portals in the earth. From here, they pitch their banners in defiance of mortality and plunge into the black, from whence they seek to extract secrets and plunder, yet more likely emerge as a trembling patchwork of scars marked by madness and death.

Though framed in canonical horror, the trappings are threadbare, the worldbuilding perfunctory, the lore emaciated. At first thumb it is a disappointment, like a system in search of a setting. How odd it seems then, that such a setting now emerges not from deep within claustrophobic caverns but from the wide and rusted, shell-jagged expanse of a wayward sea.

Far from a crutch for the less authorially inclined, the best adventure modules and sourcebooks have the capacity to bring a system to life. They imbue the sterility of mechanics and the amorphous potentia of tables with a strange sentience as the possibilities reveal themselves in imbuing each statistical premise with the fleshy narrative that upends a story from its slab. They speak of people and places that both set the pragmatic parameters and offer the players a sense of themselves as autonomous agents both in opposition to and occupation of a space and place. They shoot the world through with spice and let it breathe, cooling on the sill to be consumed. And here, in the salt encrusted, sandblasted wastes of the Andrussian Basin, we find such a space and place.

The Sea is gone. Not evaporated. Not channelled to tributaries. Gone. And in the wake of its flight, communities lie upended. Their livelihoods, their culture and their sense of purpose as vanished as the very waters from which they were derived.  And but of course…into this vacuum stride the curious, the opportunists, the redeemers. The players. Factions and individuals with interests sinister and benign have gathered here to both restore and reap from the recent un-deep. And to a man they are beset by wyrdness and plague.

By unshackling itself from its initial intent as a framework for the purity of dungeon delving at this early stage in its run of published materials, Best Left Buried has spread its wings and offered glimpses of the full potential on offer from the pens of Sam Sleney and Zachary Cox. With ‘Beneath the Missing Sea’ they have condensed both story and sourcebook into a sandbox style hex-crawl that offers a compelling narrative fraught with both languid wandering and fever drenched urgency.  And in doing so with such attention to setting, they have imbued their world with a life, culture and seed of inspiration from which numerous campaigns can spiral both inwards and outwards as the characters, intentions and creatures that dwell here form the narrative and cultural skeleton for a greater world and its people, its parlance, its promise.

Memorable imagery abounds as the random rolling flats of the wastes are etched with set-pieces that both embrace and subvert nautical tropes to great effect, borrowing the weight and legacy of ancient mariners from the collective canon before relishing in macabre twists. This duality both informs the players with its thematic heavy lifting before upending their expectations in a fashion that demands awareness and a knack for contingency. A giant albatross named Coleridge, a society of merfolk, the oaken bones of a doomed vessel, a committed cult of ascetics, a snake oil salesman and the blood of a leviathan harnessed by terrible industry. And at the centre of it all the mad Marienn, doomed wizard and Ahab analogue signposting the perils of obsession.

Images and themes are cribbed from antiquity and re-spun on the dry ocean-bed, the rickety walkways of Coiner’s Shelf and the abandoned, rot-stalked streets of Brost.  It is a space and a place both familiar and oblique, both fuzzy and fully-formed.

Just don’t expect it to hold your hand.

In presenting this tome as ‘Module by way of Sourcebook’, the scribes at BLB have both given and taken away. Presented as a field guide of sorts, it compartmentalises its information in a fashion and layout that offers an open ended and expansive experience that will consequently be nigh-on maddening for any would be Doomsayers seeking to read and run this in a linear fashion.  There are a number of entry points and primary narratives at play here, but it’s not until you have absorbed the book in its entirety that you will be able to lay claim to any firm grasp or understanding of them or how they might unfold. A brief summary at the outset offers glimpses, but in order to best imbibe this thing’s salty nectar, you’ll be best served by an initial reading spent marinating in the essence of this place. Then only once seeped to the skin in its parched brine should readers conduct a more thorough lung-busting dive, replete with note taking and transcription to best facilitate the many and varied potential paths-less-travelled that wayward parties are seemingly always wont to traverse.

By way of example- each primary location, NPC and McGuffin are afforded their own section in the book, and whilst this is functional in its way, it spreads information thin throughout, with stat-blocks, tables, descriptions and even plot threads being walled off from their point of origin in a manner that will necessitate a lot of frantic flipping in-game unless the aforementioned meticulous prep has been duly undertaken.

The introductory flavour text and explanation for any given scene may refer you to an entirely separate section of the book for details on the various NPC’s, another for the creatures, and yet another for the Items that reside therein. In doing so it renders many plot points and thematic conceits obscured until such cross-referencing has been completed. Although this works in favour of the tome as living sourcebook for future inspiration, it is an absolute ball-ache when it comes to engendering a smooth narrative session, and whilst not an uncommon choice in layout and publishing, the inclusion of truncated stat-blocks and bios in these segments to complement the more robust cast of character and bestiary sections nestled at the back would have worked wonders, especially for harried 21st century dreamers whose free-time comes at a premium.

And yet when the puzzle pieces are snapped together, each location duly comes to life. As a collection they are singularly unique yet cohesive, and whilst they form the individual vertebrae of a larger living story, could each easily and happily be transplanted into myriad other climes to add flavour to an existing campaign, tangents to a tired troupe or hooks to harangue the jaded. Further facilitating this is a section on converting the game for d20 systems, so one’s enjoyment of the bounty on offer here is not predicated on the adoption of the BLB ruleset, and as with most tomes of this ilk, an inventive runner will be offered many incentives to hack it to pieces on the scaling table extracting innards, de-boning and garnishing as they see fit.

In short, with a little work you’ll find nestled within this hardback spine the groundwork for less of a one-shot distraction and more the rudiments of a uniquely realised campaign, nay a world. Where it succeeds it succeeds admirably – in bringing to life the sights, sounds and smells of an environment that is both familiar enough to be a shared vista in the planes of the collective imagination, and alien enough to surprise, delight and dismay. Its locales feel authentic and lived-in despite their otherworldly trappings. Its characters abound with both humour, hope and tragedy, and it counts amongst its prominent events, two of the most memorable pieces of world-building and villainous motivational backstory to ever be torn from the archetypal libraries and left bleeding on the ocean bed or staring blankly towards the horizon in melancholy contemplation.

Wheezing as it lures, despite its exposure to the air – it breathes. So give yourself to the sea that it may return. Your sacrifice will be ferried in whispers from coast-to-coast.

Check out ‘Beneath the Missing Sea’ and other things Best Left Buried here. 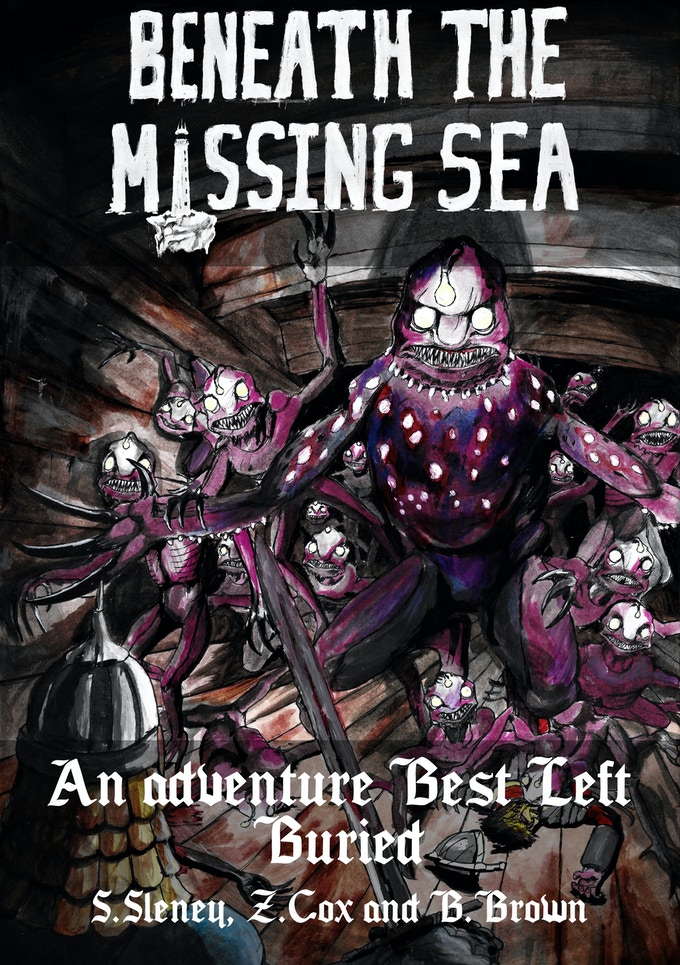