So, how are you enjoying the roll-out of your superfast and cutting edge National Broadband Network?

Now, as an additional delectably wet splash perched atop that particular shit sandwich, the Federal Department of Communications and the Arts who are presiding over that unparalleled triumph have offered a $33 million dollar grant opportunity to………….

The grant opportunity, which will not go to public tender and is a direct offer, available only to Fox Sports Australia Pty Ltd is ostensibly to “increase coverage of sports that receive low or no broadcast exposure: women’s sports, niche sports, and those sports that command high levels of community involvement and participation”. 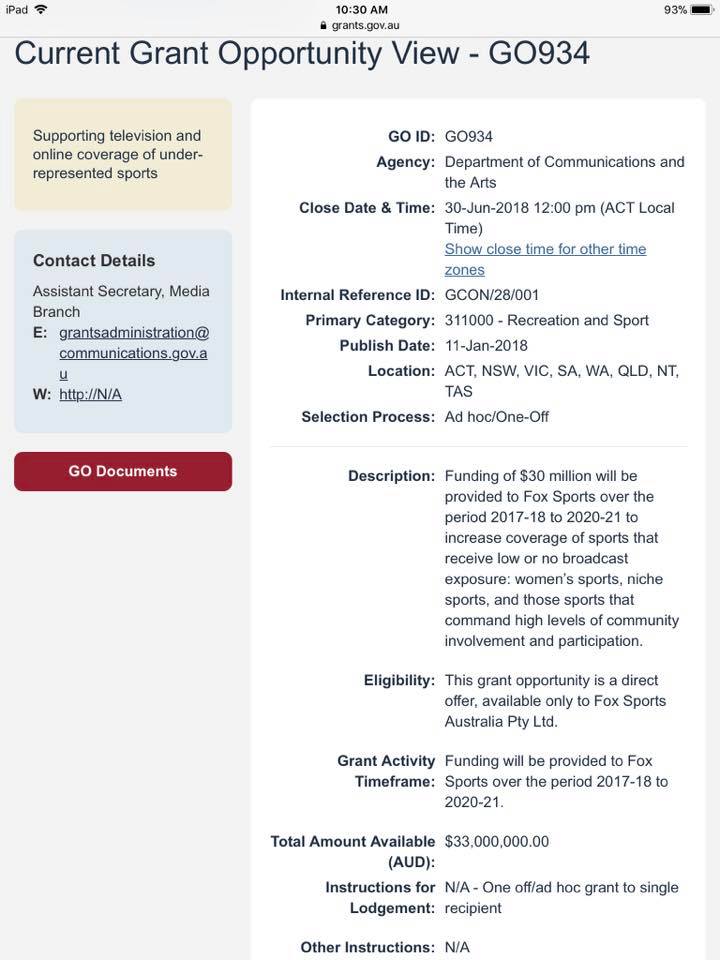 Presumably now we’ll be able to watch live coverage of the Dapto Dingo’s under 12’s semi finals, just as the public has always clamored for and demanded.

You know who’s been showing niche and women’s sports for years? Those homosexual communists at the ABC. The same ABC that has had their funding decimated by the current coalition government so they can lavish funds upon more worthy and patriotic pursuits such as…Adani? (citation needed).

Lord knows that sport is traditionally under-represented in Australia, as time and time again funding is budgeted to the dangerously subversive vegan sodomites in the realms of arts, music and culture.

So congratulations to Federal Arts and Communications Minister Mitch Fifield for opening his slackening jaw to once again gorge hungrily on Rupert’s hideous satanic prong, guzzling thirstily as big brother Mal watches entranced from the corner, his tiny scaled nub rubbing out an ever more watery succession of drizzly concessions.

In the words of Archibald prize winning artist (and possible homosexual communist) Ben Quilty “When you take the funds away from the people who tell the stories in the community, you diminish the culture and you diminish the soul of a society. It is at our peril that we chase this economic rationalisation that is a scourge in my community”.

If you’re interested in maintaining the arts, if you’re pissed off that public money is again being filtered into the cavernous, semen-stained, orphan bone-lined pockets of a sociopathic billionaire instead of funding projects predicated on community, social cohesion and the development of a public sense of conscience then it’s worth remembering that you can voice your concerns directly lest we find ourselves in an Australia where the public purse is continually pillaged to prop up the desiccated bubonic shell of an ageing Oligarchs propaganda engine.

You can write to hungry Mitch here.