The boardgaming bug is a curious beast.  It had flitted about my head all my life as I maintained a healthy appreciation for the hobby, never really crowding my vision with its gossamer wings as I dabbled here and there, maintaining a respectful distance.

These manageable bouts of entomology came to a dramatic end about a year ago when that bug finally tired of our casual dalliances and bit me hard.  Like ‘leave scars’ hard.

All of a sudden I was ravenous. Impractically hungry. I fell to its embrace with a resignation bordering on delight. Since that time the infection has progressed via several stages that may be familiar to fellow travellers. First the giddy wide-eyed phase of random acquisition, then the ill-advised wallet-emaciating Kickstarter binge, and third, the dig for indies that burrows like a bore-worm as we find our flavour is not catered to by the overground Fantasy Flights and CMON’s of this world.

This dig pretty quickly brought me to a pit of infinite shadows presided over by one Nate Hayden. Auteur. Man of Mystery. Possible Black Wizard.

I blame the evocative art of Tempest Tome’s forthcoming Cryptic Explorers. Their persuasive pitch contained a testimonial from the creator of something called ‘Cave Evil’. And Cave Evil’s logo was badass.  A bit of google-fu later I yielded to the realisation that Cave Evil was a bridge too far, long out of print and commanding eye-watering sums on the re-sale market. But nestled beside it in the pit was a similarly intoxicating prospect.

I’ve always been a zine guy. My teenage years in the early 90’s were spent deeply enmeshed in the underground fanzine and tape-trading scene, shipping obscurities from suburban wastelands across borders and boredom in hand scrawled packages graced with wax slicked stamps. Like so many imprints forged in our formative years, a love for the DIY mindset and aesthetic never left me. In a world where digital toolsets have rendered the overground glossy and uniform in its competency, there are still thriving pockets of hand daubed passion that reek of the forbidden, and the Emperors of Eternal Evil are busy xeroxing the banner for this still proud horde.

Presented in zine format, Sea Evil (the third in an ongoing series of ‘Halloween Horror’ game magazines), had the strongest lure, playing as it did on my other obsession- salty tales of doomed sailors, shipwreck, scurvy, cannibalism and sodomy.

We all have our thing. 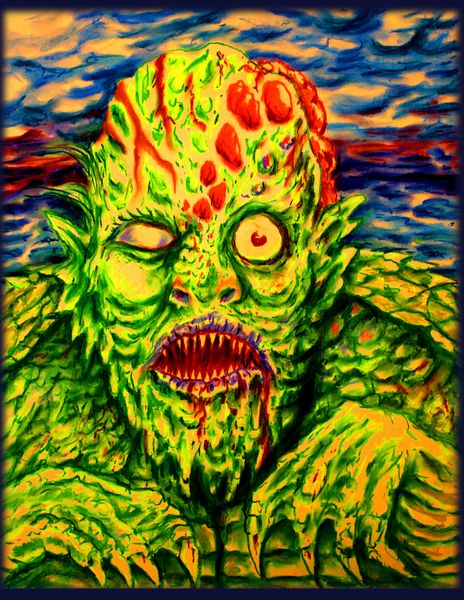 Surprisingly, my friends were keen on the pitch and dutifully assumed the roles of the crew of the good ship Ishara on its doomed voyage home. I was to play the titular evil. A prospect I relished as I scried the sea witch and her complement of creatures.

Redolent of the old school zip-lock wargames I used to see gathering dust in the game store I frequented as a kid to drool over the loftily aspirational pewter figurines, Sea Evil nonetheless manages to evoke a sense of atmosphere that most bloated mini-heavy productions fail to match. Its hand cut cards and imperfectly punched chits dovetailing perfectly with the theme to conjure the hazy rustic scent of half-imbibed nostalgia as well as the briny tang of the unexplored. There’s no substitute for the theatre of the mind, and with the artistic prompts scrawled onto these not quite glossy artefacts, the roil and foam of our playspace was embedded as it unfurled upon the table.

At its heart the mechanics are simple, if not quite elegant. A core sequence of events each turn beset by numerous situational exceptions. Like all good Amerithrash, it’s a suite of systems in service of a story.

The ten strong crew of the ship Ishara are wearily bound for home and the welcoming glow of the lighthouse. In their path lies a litany of archetypes drawn from the sailor’s tales and shanties that have evolved over history from the minds of half starved, diseased and overworked mariners, as they grasp for a romanticism to gild their drudgery.  Shades of Melville and more ancient scribes abound as they are confronted with white whales, krakens, crabs and fungus. The hunger, the lice, the cold and disease! The sodomy, the dysentery, the amputees!

Like most asymmetrical one-against-many games, the outcomes can swing wildly and the game proudly proclaims its disregard for balance. Players are meant to feel overwhelmed and desperate, their every move a contingent response to evolving calamity. As the evil player one must press, make the most of the random elements assigned you and never allow the crew to focus and combine their energies. Should they rally, then multiple harpoon tips are sure to puncture your veil of dread. Though dice will tumble adding the wrinkle of RNG, strategic positioning and deployment of resources are paramount to success for either entity.

If it’s perfectly balanced mechanics you’re seeking then there’s any number of meticulously tuned games about trading pottery that I’m sure you’ll forget about as soon as you’re done with.  Sea Evil offers something else entirely as players scramble to repair the mast, bail the flooding hold, harpoon the behemoth and stop the infection as their will to live dwindles in the face of monstrous fate.

Catering to anything from 2-11 players, the sweet spot is probably six. Allowing each member of the Ishara team agency over two of the crew lessens the potential sting of early player elimination without sacrificing the tension and risk inherent when death is a very real possibility.  And when each death is accompanied by the delightfully grisly textbook margin scribbles that adorn the Kill cards, it’s a demise worth savouring.

Ideally the players will fall into their roles as events dictate. Our group had one member finding their natural voice as they barked orders and kept sight of the bigger picture as they delegated duties, whilst others embodied their characters to a fault, clashing with one another, the evil and the elements, engendering the most boisterous table-talk uttered in many moons. Meanwhile evil sat back delighted as these pitiable pawns somehow found the unity of purpose to repel each mounting assault. We were paying scant concern with who was ‘the winner’, wrapt in the story as we were.

I’ll spare you the details of their fate, harrowing or triumphant. Did dead reckoning find them safe harbour or were they whittled to husks and set adrift?

You’re going to need to play to find out.

Sea Evil and a raft of other sinister gems are available here. 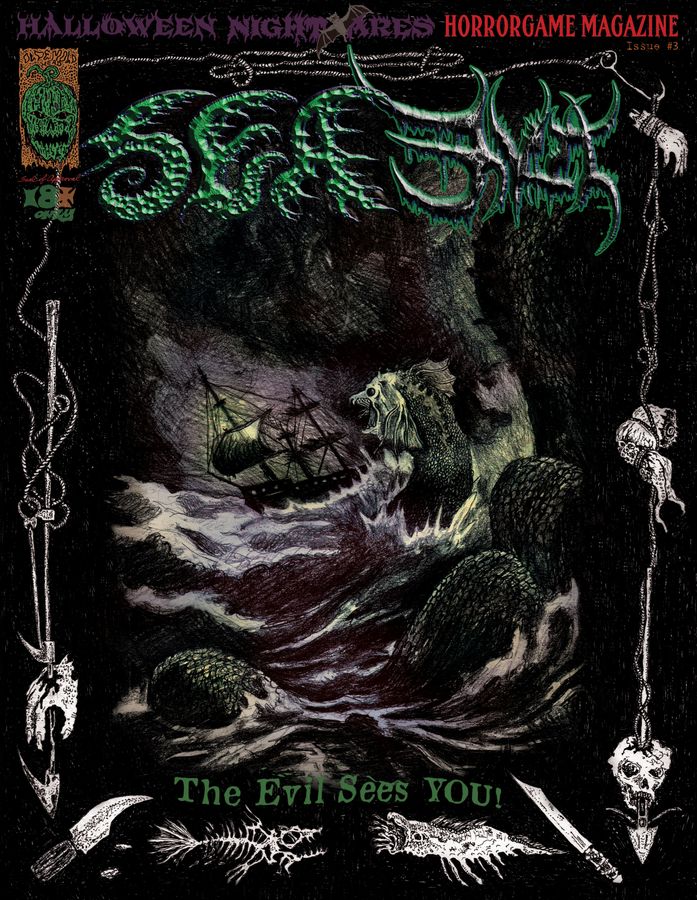 2 thoughts on “Rum, Sodomy and the Thrash – an afternoon with Sea Evil.”