From the pits of the punk rock explosion to the mean streets of the Würstreich, Goblinko mastermind Sean Äaberg has been there, feathered quill in studded-wristband hand. Instantly recognisable, his heavy linework style leaps out at the viewer in brimstone jets of ultraviolet excess, a heady, addictive mix of xeroxed DIY bones wrapped in blue sunshine skin.

Most recently lauded for his work on Dungeon Degenerates: Hand of Doom, together with game designer Eric Radey he conceived a peak Amerithrash world-crawler that turned genre conventions on their heads and shook them ‘til their pockets emptied, looting them of archetypal staples whilst smearing day-glo paint, blood and lube atop the boring bits.

It couldn’t fail to turn heads. 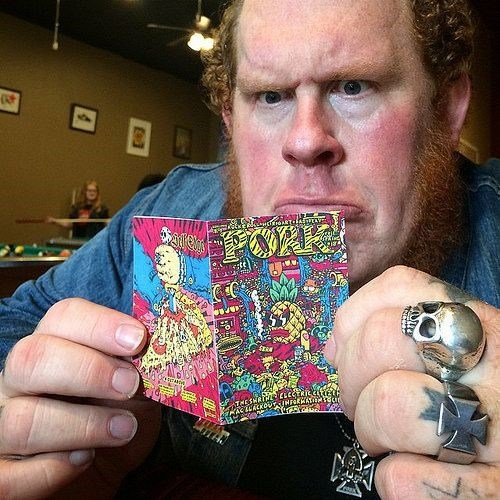 Upon opening the box it becomes strikingly clear that the sinister climes of the Würstreich were conjured fully-formed and spoke of a lifetime’s percolation, of stink and inspiration bubbling and brewing in cerebral cauldrons as a style was minted longform and lingering…

“I started drawing when I was very young, like before I could read. I decided to be an artist whenever it was that I understood what being an artist meant.

As with now, my influences are what I liked, so as a kid my favourite stuff was in comic books and honestly, whatever I found visually stimulating. Long-time contenders are the films of Terry Gilliam, Ralph Bakshi & Ridley Scott, comics like Groo, the early Teenage Mutant Ninja Turtles, and the first wave of translated manga like Akira, Nausicaa, Mai the Psychic Girl & Battle Angel Alita. Gary Panter influenced me greatly via Pee-Wee’s Playhouse, 80’s Games Workshop stuff was perfect, and I like some ‘proper artists’ too like Salvador Dali, Andy Warhol, Pieter Brueghel & Hieronymous Bosch”.

From this stylistically disparate but thematically aligned palette something transformative was triggered, but the clarion three-chord call of Punk Rock as a redemptive agent of reinvention was also blaring its trebly d-beat lure…

“I think it all started to click when I was a teenager and I realized that I could become the person I wanted to be, and art was tied into that completely. Punk was the prism that I used to view the world through, and that has just evolved into me acknowledging that I have my own, weird way of looking at the world. For a while now I’ve been able to find inspiration in the real world, just from the weird way that I look at things, which is cool because my own brain is acting as the primary agent, as opposed to seeing this through someone else’s filter. Punk meant freedom and some kind of useful, tribal conformity to me when I needed it most. The incorporation of Heavy Rock & Heavy Metal into the aesthetic was personal taste. The whole package has attracted me consistently, so it was the fashion, the way of life, the music, the zines and the shops all working their magic through the fans, all of which are totally connected to a time and a place that has now passed as far as I can see”. 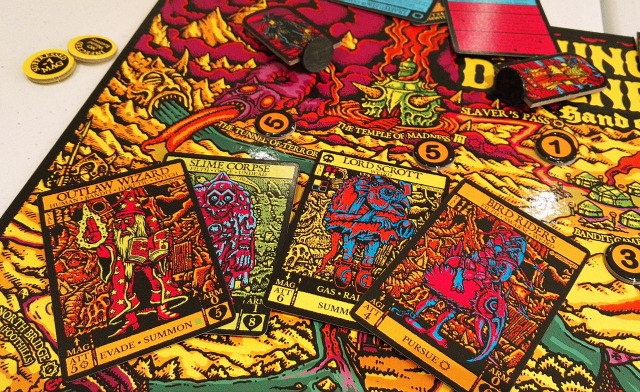 If music and art offered an escape and sense of identity, then surely gaming wasn’t far behind in that formative triumvirate, particularly in those heady early days when it still carried the carrion aroma of the forbidden, as though swung from an ornate Gygaxian censer.

“I think I “played” AD&D before I could even read and was very attracted to the gem-like dice in a plush bag. Because of that I started tracking it from a young age, Satanic-Panic and all. I think the early art on the game book and module covers really attracted me. I started playing whatever I could get my hands on, but you’ve got to understand, video games were evolving A LOT at this time, so I was attracted to those very much. I think the first RPG style games I played and got into were Bard’s Tale, Zork I & Hack, all of which I played on the computer. Later I got into actual pencil & paper RPGs like D&D which was quickly superseded by the Palladium games, starting with TMNT and ending up with Robotech but evolving into my own home-baked version. Then I found Warhammer Fantasy Roleplay & the Call of Cthulhu RPG which both really resonated with my hopeless worldview at the time.

Dungeon Degenerates was my first professional foray into gaming, but it did draw a lot from role playing as a pre-teen with my own home-baked rule systems. I came up with the idea for Dungeon Degenerates in 2007 or so, with the same intention as PORK magazine, which was to synthesize what came before and drag it through the gutter with the audience included. We decided to release the series as a battling card game and texted Eric Radey who ran with the ball and came back with a board game. Eric is a childhood friend who I used to drink and game with and played guitar for my teenage Punk band “The Masked Men”

Alongside the dirty denim battlevest smears, Sean’s style, particularly his embrace of such wild, high-contrast colour schemes speaks of psilocybin and psychonautical inner-space diving, recalling the Blue Meanies as strongly as it does Blue Cheer.

“I myself like the drug culture more than drugs themselves, but I’ve smoked a lot of weed and more recently have done a lot of mushrooms which have all added to my oeuvre. To quote Dali, “I don’t do drugs, I AM drugs.” That said, Zane Kesey (the inheritor of the Kesey lysergic dynasty) asked me to do some blotter paper with him recently”.

Emerging during a particularly fecund period for the gaming underground, with Dungeon Degenerates, Sean and Goblinko joined a growing cadre of DIY publishers with a countercultural punk/metal aesthetic and mindset infiltrating the tabletop community that includes the likes of the Emperors of Eternal Evil, Craft Fair Games, and the swelling ranks of the Old School Renaissance.

“Unfortunately I’m too busy to play most games myself, but I have noted Cave Evil by Blast City Games, the Wasteman series from our sculptor Jason Fairclough and our friends in Ghoul released a board game and record called “Dungeon Bastards”. 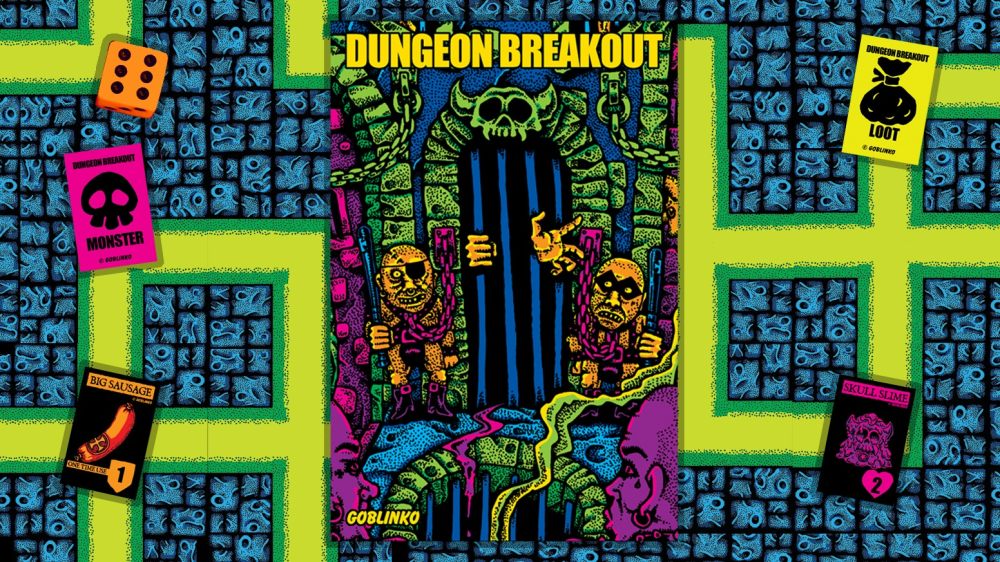 “Dungeon Breakout is our fast and easy party game to get people in the door for whom Dungeon Degenerates is too heavy and too much of a time commitment. It’s more like the games I play with my family and is designed by my wife Katie. Having a supportive wife and partner in Katie Äaberg has been an undeniable necessity for all this, because I was ready to die or go to jail before we hooked up. She saved my life again when I had this stroke in September of 2018. Acid Vomit! is our first book and my first art book, acting as an introduction to my work and covering the last twenty-plus years or so of my work up until the stroke I suffered in late September of 2018. It’s 200+ full-colour pages, hard covered and people are loving it.

Despite recovering from a stroke that has cruelly forced him to re-evaluate and re-approach his artistic process, whilst being confined to lockdown as the world continues to churn beneath the Covid Cloud, Sean is busy making time.  As an artist he continues to experiment, embracing the digital medium as necessity ferries a transition from inks to bits, and hurling daggers at a wall of ideas that are sure to unfurl into fully blown abominations.

Me and Katie are having a meeting for what’s next with Dungeon Breakout soon, we’re talking about a fantasy chess set, the Adventures of Pipu board game and this Halloween book that we’ve talked about doing for ages. Also, I’ve been working on the direct sequel to DUNGEON DEGENERATES: HAND OF DOOM, and I’m working on a new digital collage style to possibly go along with it.

It’s wild. I feel like I’m handling the quarantine just fine, but I am concerned about the strain it is having on others, particularly my wife and kids. I have put my imagination to work on the various Goblinko projects and honestly have no idea what things will be like after this and have no interest in positing possible outcomes. Obviously, I want things to be better in the future and I hope people learn some crucial lessons from this, but I am going to be ready for whatever happens”.

A legion of degenerates lies waiting. 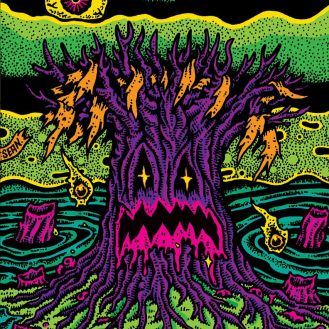